Ah, steampunk goggles! It is certainly the most emblematic accessory of the retrofuturistic style . Whether one embodies a dandy from the Victorian era, a mad scientist, a zeppelin pilot or even an adventuress… no steampunk outfit could be complete without a pair of goggles (or goggles in good French).

But what could goggles have looked like at the time of the industrial revolution, where steampunk draws its inspiration from?

With the railroad boom of the 1840s , cinder goggles began to be mass produced and sold. Contrary to what one might think, these glasses were not reserved for railway workers. Passengers also wore them, because at the time, the wagons had no windows! Besides, the third-class compartments didn’t even have a roof! The ashes expelled by the chimneys of the steam locomotives could thus enter the passenger cars. To protect themselves, they therefore wore protective glasses like these:

Like conventional glasses, these protective glasses could have branches. However, these were more often replaced by a leather strap or rubber band so that the glasses fit snugly and provide the best eye protection. If we are to believe the 1897 optical catalog of the D. Latour house in France, cinder goggles were called mistralian glasses when they had branches or railway glasses when this was not the case. The glasses could be white, blue or smoked.

By car, Simone! And don’t forget your goggles. 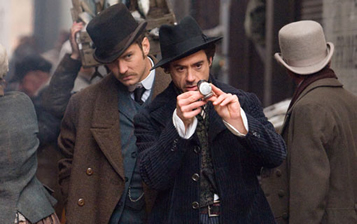 Sherlock Holmes (Robert Downey Jr) and his trusty sidekick Doctor Watson (Jude Law) both wear goggles that look like steampunk goggles in this scene from the 2011 film Sherlock Holmes: A Game of Shadows .

The plot of the film takes place in 1891, but it was still uncommon to wear protective glasses while driving an automobile at that time. On the one hand, it was considered unsightly, especially for ladies. On the other hand, it was relatively useless, since the speeds of motorized vehicles did not exceed 15-20 km/h. It will be necessary to wait for the beginning of the 20th century to see the appearance of faster models. And so it was not until the early 1900s that motorists began to frequently wear goggles . These will then be considered an absolute necessity for driving comfort and safety. In any case, this is what Sir Alfred Charles William Harmsworth asserts in Motors and Motor-driving, his guide to automobile driving published in 1904 (pages 67 and 73 for the curious).

After the beginnings of aviation in 1903, goggles quickly became a necessity for pilots. Indeed, they had to protect their eyes from the wind but especially from the extreme cold prevailing at high altitude. The misadventure of Rudolf William “Shorty” Shroeder is there to remind us. On February 27, 1920, this US Army test pilot set an altitude record of 10,000 meters aboard his Packard-LePère LUSAC 11. At this point, his air supply ran out, and he made the mistake of lifting his glasses to change his oxygen cylinder. The thermometer showed a temperature of -55°C and his eyeballs were instantly frozen.. Shorty Schroeder lost consciousness due to lack of oxygen. He regained consciousness before the crash and miraculously managed to land his camera, when he was almost blind.

Steampunk goggles therefore have a real historical anchoring . However, we have seen that the use of goggles by the general public in the 19th century was rather limited to rail transport . 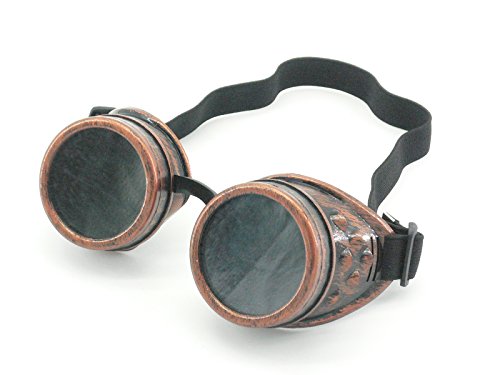 From cinder goggles to steampunk goggles

As you can see from the gallery below, steampunk goggles are largely inspired by Victorian-era railway goggles. Same shape, different materials. To reinforce the steampunk style, goggles are usually made of copper or leather (or an imitation of these materials). Some models also feature spikes – to add a post-apocalyptic touch – or come equipped with magnifying lenses to spice up the look with a pinch of sophistication.

But why do all vaporists (or almost!) wear goggles when they have decided to embody their steamsona (steampunk character)? Surely because in neo-Victorian fiction, engineers can be exposed to jets of steam next to machines, pilots have to face the wind and especially the cold at the controls of an aircraft, and inventors risk being injured by sparks or projections of dangerous substances… It is therefore not surprising that goggles are commonplace to protect the eyes from these multiple dangers. Or maybe just, goggles are like gears, long coats, corsets, and pocket watches . We love them and that’s it!

Steampunk glasses, an alternative to goggles

Most vaporists choose to wear their goggles over a top hat or directly on the head. The problem is that apart from photoshoots and conventions, there are still few occasions to wear them.

An alternative is to wear steampunk sunglasses . In everyday life, they remain the best way to discreetly show our love of gender.

Hello, my name is Zoe Madden, and I am a huge fan of all things Steampunk. I've always been fascinated by history and how fashion evolves over time. The Steampunk movement in particular fascinated me. Its popularity is growing, especially as more steampunk books and entertainment are being created. Steampunkorigins.com is the ideal website for anyone who wants to learn everything there is to know about Steampunk. 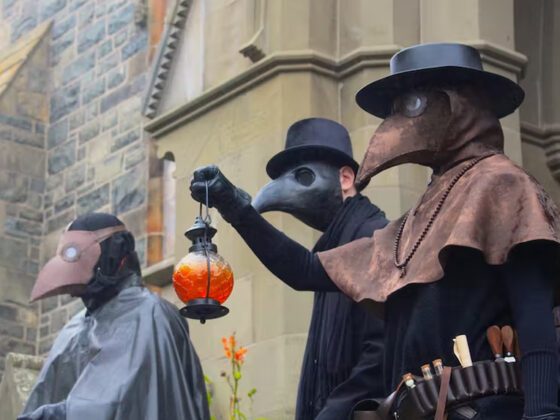 The History of the Steampunk Plague Doctor 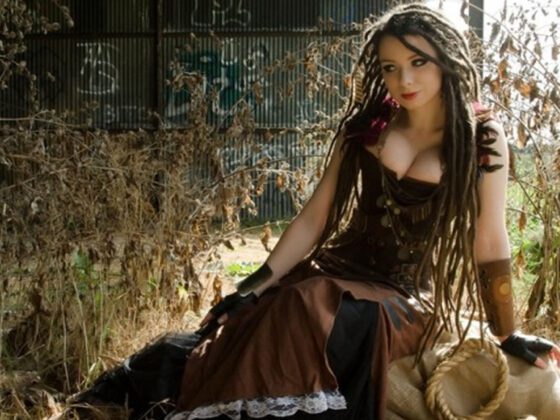 What Makes A Good Steampunk Corset